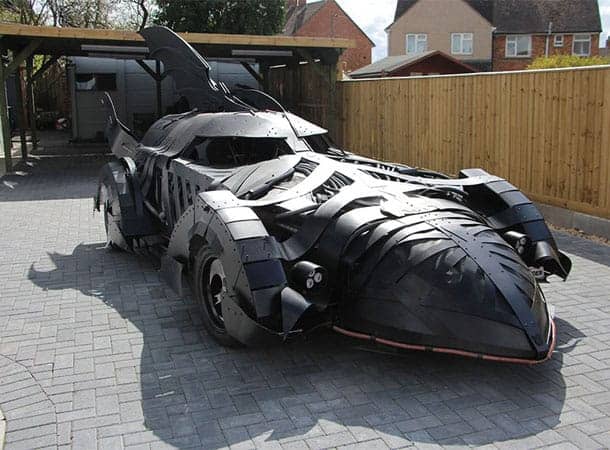 Straight from the pages of a comic book, a stunning reimagining of Batman’s Batmobile will join the impressive line-up of customised machines at the Hot Rod & Custom Drive-In Day at Beaulieu on Father’s Day, Sunday June 18th.

The fantastic 21ft long creation will wow show-goers as part of the display of more than 500 amazing hot rods and custom cars and bikes, demonstrating the creativity and technical know-how at the heart of the customised scene.

Just like Batman’s silver-screen transport, this British-built homage to the superhero shoots flames from its exhaust and features huge bat-like wings on its roof.

Inspired by the Batmobile from the 1995 Batman Forever film, the car was built from scratch by Mark Enright of Podpadstudios in Wiltshire, using all manner of parts.

There is more than a hint of steampunk style and retro futurism to this car’s unique design.

Mark said: “It is a true custom car and I built it using whatever I could get my hands on.

The 1.8-litre engine and rear part of the chassis are from a Toyota MR2, while the steering uses Smart car parts.”

Hot Rod & Custom Drive-In Day is held in association with classic American car club the Solent Renegades in the grounds of the National Motor Museum.

Experience the sights, sounds and smells of these imaginative creations, from stripped-out hot rods and mega-powered monsters to cool customs and ‘slammed’ cruisers.

Returning this year is crowd favourite Hard Up Garage with a dramatic display of eye-catching hot rods and rat rods as it starts up its unique automotive machines.

If you love two and three-wheelers you will also be spoilt for choice by the multitude of bikes and trikes on display, which range from traditional classics to monster-engine trikes.

NFDC has awarded the Hythe to Southampton passenger ferry a £15k grant to help this important community transport provider adversely affected by reduced passenger numbers due to Covid-19. ...