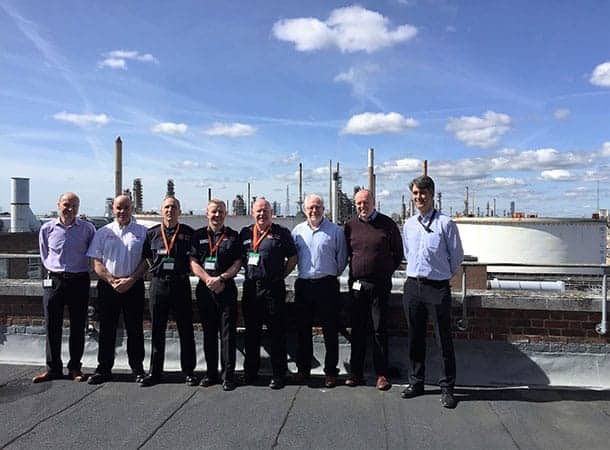 Cementing an already close relationship with Hampshire Fire and Rescue Service (HFRS) was the aim of a visit which saw the county’s Chief Fire Officer and his deputy visit ExxonMobil Fawley.

Neil Odin, HFRS Chief Fire Officer, his deputy Andy Bowers, and Steve Ash, HFRS Group Manager for the New Forest area, were all invited to the site for an informal visit, which included a look around the new fire station which was officially opened last year.

They gave the guests an overview of the Fawley plant before Richard Jones led a tour of the site, starting at the fire station.

“It’s very important to us as a site that we work closely with HFRS and maintain the strong relationship we have built up with the service over many years. It was a pleasure to be able to host Neil, Andy and Steve, and I hope they found the visit interesting and informative.

“Fortunately, it’s rare that we have to call upon the services of HFRS.

However, it’s crucial that we make sure we are fully aligned and ready to work together should the need arise.”

Hundreds of elderly and vulnerable people across Hampshire and the Isle of Wight will be given carbon monoxide (CO) detectors as part of a campaign led by the Blue Lamp Trust and supported by ExxonMobil Fawley. ...