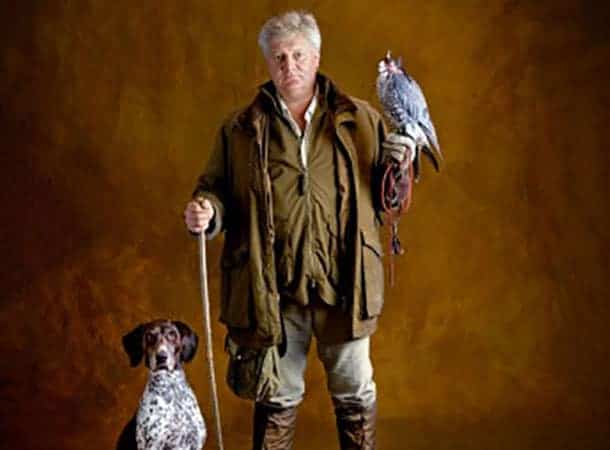 Lord Montagu has rekindled Beaulieu’s ancient association with the art of falconry by appointing the first official falconer in three centuries.

The history of falconry at Beaulieu can be traced as far back as the 11th century and Paul Manning is believed to be the first falconer endorsed by the Montagu family for over 300 years.

Paul will be based in Abbot’s Mews in the grounds of 13th century Beaulieu Abbey.

The former ticket kiosk at the old gateway to Beaulieu will become a classroom for falconry tuition and activities, as well as an exhibition for attraction visitors to learn more about kings, queens and nobleman who practiced falconry.

Paul will give falconry demonstrations at Beaulieu as part of Spies and Soldiers themed half-term activities from May 26th – June 3rd, telling visitors about the role of falconry in World War II and how it helped to prevent enemy spy messages from being delivered.

Paul said: “It is a real honour to be Lord Montagu’s falconer, particularly with Beaulieu’s rich history of falconry. The wonderful thing about falconry is that it is truly living history, as what I do is exactly the same as 700 years ago. Nothing has changed, from the birds to the skills or equipment.

“I’m really pleased with the Abbot’s Mews exhibition and it is a wonderful base for the falconry school. UNESCO has classed falconry as an example of intangible cultural heritage, as it was traditionally practiced all over the world by many different cultures.

However, today it is seen as quintessentially British and has been enjoyed by some of the most powerful people in Britain, including King John, King Henry VIII and King James I.”

Visitors to Abbot’s Mews can discover the full story of falconry at Beaulieu and its royal patronage, which has been researched by Paul. He has been delighting visitors with the sight of his magnificent birds of prey in flight as part of Beaulieu’s Living History for 10 years.

The new Abbot’s Mews exhibition and May half-term activities are included in a general admission ticket to Beaulieu, which also includes entry to the National Motor Museum, World of Top Gear, On Screen Cars, the Montagu ancestral home of Palace House, Beaulieu Abbey and the stunning grounds and gardens.

Tickets can be bought in advance online.

Falconry at Beaulieu Fact File:
• The earliest evidence of hunting with trained birds is from 4,500 years ago in Anatolia (modern Syria), while falconers of the New Forest were recorded in the Domesday Book of 1086.

• Birds of prey were powerful status symbols, with Lord Montagu’s ancestors choosing different winged creatures for their shield crests. Drogo De Monte-Acuto (born c.1040), comrade of William Duke of Normandy, bore a griffin on his shield during the 1066 invasion of Britain, while Ralph de Monthermer (1270-1325) chose an eagle for his shield.

• Montagu ancestor John Writhe, father of Beaulieu’s first owner Thomas Wriothesley, was granted the right to bear the white gyrfalcon on his family coat of arms in recognition of his service as Falcon Herald and first Garter Principal King of the College of Arms.

• King John (1167-1216) was a passionate falconer and he founded Beaulieu Abbey in 1204, in the heart of his royal hunting ground. Equally enthusiastic about the sport was King Henry VIII (1491-1547); his dissolution of the monasteries in 1538 saw the end of Beaulieu Abbey.

• Various Abbots of Beaulieu Abbey were almost certainly practicing falconers, such as Acius of Gisors, who would have acquired extensive falconry knowledge when sent on missions to Germany and Rome by King Henry III (1207-1272).

• As well as being an invaluable hunting aid, birds of prey reflected social rank. The highly-prized gyrfalcon was the preserve of kings only, with the peregrine falcon reserved for princes and dukes, the saker falcon for knights, female sparrow hawk for priests and the kestrel for knave servants or children.

• Henry Wriothesley, 3rd Earl of Southampton (1573-1624) was the only known patron of William Shakespeare. The bard’s poems dedicated to the Earl, Venus and Adonis (1593) and The Rape of Lucrece (1594) demonstrated a detailed knowledge of falconry.

• The reign of King James I (1566-1625) was a high point for the popularity of falconry, the king describing it as a ‘great stirrer-up of passions’. Hunting with birds of prey was a key part of his nine visits to Beaulieu over the years.

• Although falconry almost died out in Britain following the introduction of firearms, a revival was led in the 19th century by the Hon. Gerald Lascelles (1849-1928). Deputy Surveyor of the New Forest and 2nd cousin and friend of John, 2ndBaron Montagu of Beaulieu, Lascelles was the secretary of the Old Hawking Club, which was based in nearby Lyndhurst from 1880 to 1914. It is highly likely that Lascelles and John, Lord Montagu practiced falconry on the Beaulieu Estate.

• Paul’s new Abbot’s Mews base within the walls of Beaulieu Abbey may look medieval but is in fact the 20th century admissions ticket kiosk for visitors.

After being replaced in the 1950s, Abbot’s Mews was later used for storage but has now found a new lease of life.