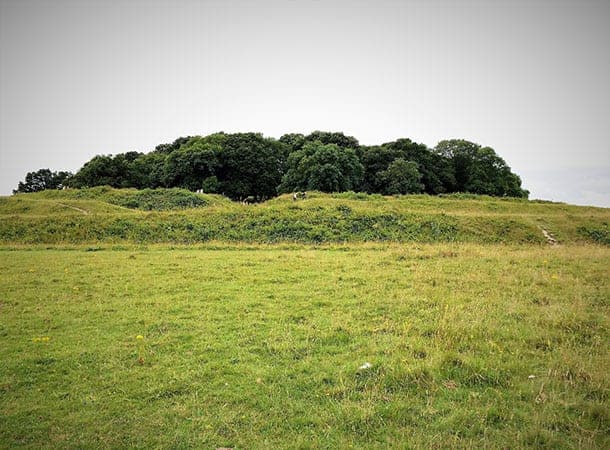 Members of the natural history society who went to Badbury Rings on a warm July Sunday had the pleasure of walking through Squinancywort, Fairy Flax and Eyebright.

A sharp eye on the ground also had the advantage of avoiding the cow dung from the herd of cows brought in to keep the grass short.

Badbury Rings in East Dorset is thought to have been created in the Iron Age but may have been inhabited even earlier.The rings are embankments of earth around a hill that

The rings are embankments of earth around a hill that provide a commanding view of the surrounding area.

It is easy to see that the rings were some form of defence but what or who they were defending is open to speculation.

Whatever the reason the embankments and hill must have been a formidable sight when built and remain so even today.

There are several well-signed walks in the area and it is a popular destination for people who wish to enjoy the countryside.

It is possible however to walk anywhere on the reserve, which is now owned by the National Trust, and small tracks have been made over and along the embankments.

The route taken was a circular walk around the edge of the reserve followed by a walk to the centre and round one side of the innermost embankment.

Most of the plants were characteristic of chalk downland but since the ground has been largely undisturbed since the rings were excavated there is a large variety of wild flowers.

The Squinancywort, Fairy Flax and Eyebright are all small flowers which pepper the ground like snowflakes and are easily overlooked.

Squinancywort is derived from its supposed ability to treat quinsy which was a virulent form of tonsillitis.

Fairy Flax, which is poisonous, was used to treat constipation and Eyebright, as its name implies, was used for eye irritations.

Many of the wild flowers had been in flower for several months and were beginning to get rather jaded.

They had been joined recently by the pale blue flowers of Field Scabious, Small Scabious and Harebells.

Thistles which also flower late in the summer included Creeping Thistle, Spear Thistle, Marsh Thistle and the Stemless Thistle which grows only on chalk soils.

Marsh Thistles can be confused with Welted Thistles which are quite similar but Marsh Thistle is usually suffused with red and the flowers can sometimes be white.

In the centre of the rings on top of the hill Scots pine had grown but in order to return the land to its natural state, some of them had been removed leaving shallow depressions.

The clearings allowed Willowherb and Blackberries to grow which in turn attracted insects such as Dragonflies, Bees and Butterflies. 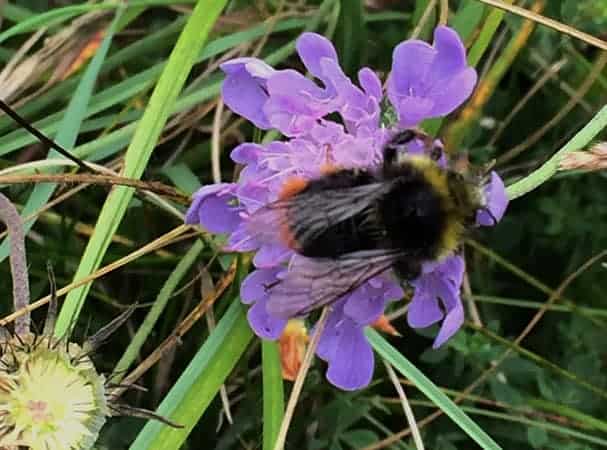 Most of the Bees were Red Tailed Bumble Bees which are still quite common on grassland.

Gatekeeper butterflies were seen in good numbers even though the sky was overcast for most of the day.

Soldier beetles with their orange/red bodies and dark rear end have had a prolific year and could be seen on most flower heads including Ragwort which also attracts the Cinnabar Moth and its striped caterpillar.

The hot muggy weather with overcast skies made exertion of any sort difficult but standing in such a beautiful spot admiring the English countryside as far away as the Isle of Wight was a very pleasant experience.