The outdoor meeting in May was a walk centred on Pondhead Inclosure near Lyndhurst.

The meeting by coincidence happened to coincide with an open day given by staff and volunteers of the ‘Pondhead Conservation Trust’.

Demonstrations, guided walks and posted information were all freely available.

The information written on signs at various points in the woods greatly added interest to the walk although the society did not actively participate in the event.

Many thanks must be given to Dave Dibden and volunteers of the charity for all their help and work undertaken to make Pondhead Inclosure a shining example of managed woodland within the New Forest.

The walk itself on a cool but sunny day in May was a delight.

The blue carpet of bluebells has passed its peak in the south but unrolls progressively further north to begin flowering in Scotland later in May.

Bluebells in grazed woodland such as the New Forest however are smaller, more evenly spread over the forest floor and reach their peak later than urban areas.

The result is those bluebells are still flowering in the south under a canopy of fresh lime green tree leaves.

A demonstration area in a woodland clearing had as star attraction a charcoal burner which was in the process of making charcoal from Hazel logs.

The machine looks like a Stephensons Rocket with a box of hazel logs in place of the boiler.

Spare wood was used to fuel the furnace and this was supplemented by volatiles off the heated logs as they turned to charcoal in the absence of oxygen from the air.

A temperature indicator showed over 490 degrees Centigrade at the time.

Samples of charcoal made earlier were being used by children to draw pictures but the main use these days is as a barbeque fuel.

The main lesson to be learnt however was that the forest can be a working concern and not just a place to visit. 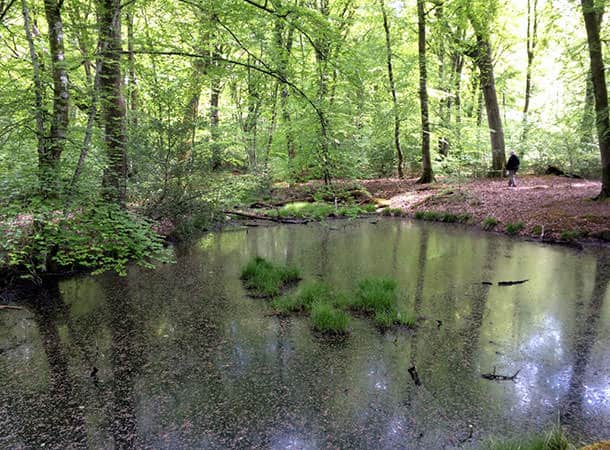 Another example of a working forest was the Marl pits which covered quite a large area.

Marl consists of clay and mud that was dug out of the ground and transported to arable areas to enrich the soil.

This activity no longer continues but some impression of the effort taken to dig heavy clay out by hand was given by the large pits some of which have filled with water and turned into ponds.

Trees have regrown in the areas between Marl pits but the forest floor has largely been populated by a variety of mosses.

There was a wide variety of plants in the Pondhead inclosure besides the bluebells.

Ferns and Sedges grew along the banks of ditches at the path side and green shoots of bracken were unfurling on the forest floor.

Primroses were still in flower but their growing leaves were beginning to hide the flowers.

The white flowers of Stitchwort, Wood Anemone and Wood Sorrel mingled with the bluebells.

Blue flowers of Ground Ivy, Dog Violet, Bugle and Speedwell grew along the edge of the tracks.

Ground Ivy can be recognised by the purple tint to the leaves and close inspection of the flowers reveal two purple dots on the blue lower lip.

Dog Violets can be recognised by the light coloured spur and sharply pointed sepals.

Tormentil and Yellow Pimpernel were beginning to come into bloom on any bare patch.

Brimstone and Orange Tip butterflies have been on the wing for some time but they have recently been supplemented by Large Whites and a few of these were seen flying over the cleared undergrowth.

May is a busy time of year for birds.

Resident birds such as Blackbirds and Starlings already have young which are constantly calling for food but the migrants are still singing to attract a mate.

Chief of these is the Cuckoo but warblers such as the Chiffchaff, Blackcap and Whitethroat provided a strong musical background in the lush vegetation.

A loud call heard in the woods near Lime Wood Hotel sounded like a Peacock but this was unable to be verified.

This was originally an embankment surmounted by a wooden fence which was used to funnel deer towards waiting hunters in the time of Charles the second.

The fence has long since disappeared and the embankment was ill defined except on the Ordnance Survey maps.

Many visitors must walk close to its path along Matley Ridge without knowing its historical significance.